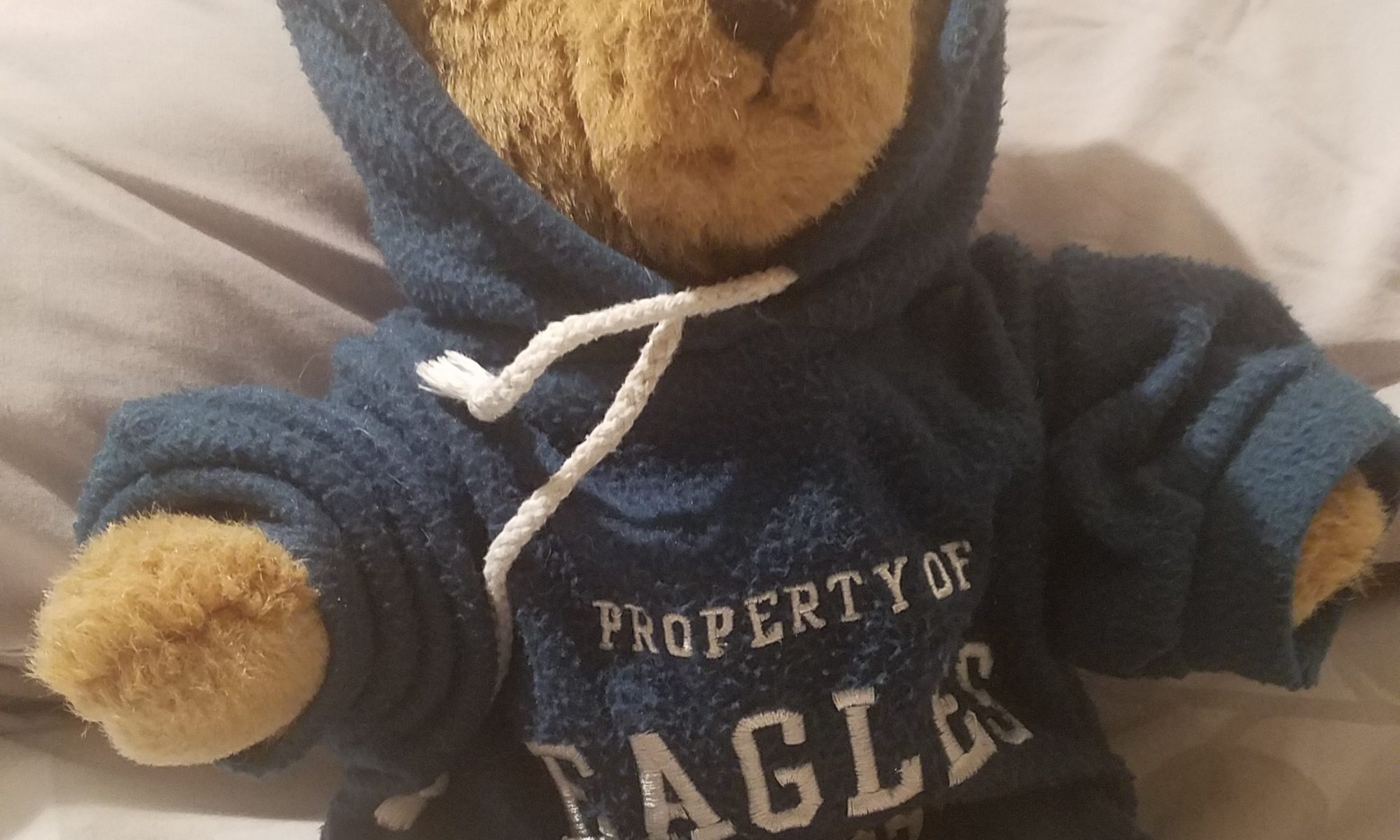 It is scary to feel like joy will never again truly touch your soul.  My 5-year-old son lost his first tooth and I was distraught….I started crying.  All I could think was ‘Malcolm will never lose a tooth.’.

Moments like this are a frequent occurrence.  Specifically, when this pertains to my son and daughter, I am very upset by it….fucking furious, actually.  I feel like aside from being desperately sad, Chris and I are being robbed of moments of happiness that are every parent’s right to enjoy (we, as parents, certainly put in the work!).

Conversely, things that used to stress me out or made me sad, or frustrated, no longer bother me.  As an example, one morning Chris woke me to tell me our car was hit (eventually deemed totalled). I thought ‘so what?  This is a fixable thing.’ and I rolled over and went back to sleep.

One of the things both Chris and I enjoyed in our past life, our life before Malcolm died, was watching the Eagles play football.  It is one of the things we bonded over while dating and we have attended many games in many different stadiums over the years.

When I was pregnant with Malcolm, we were having trouble agreeing on a name.  Our other two kids are M names, and we wanted to continue the tradition, but only if we really loved the name.  Then one night we were watching the Eagles and Malcolm Jenkins introduced himself and Chris and I looked at one another and said ’Malcolm’.  We must have come across this name before, but hearing Jenkins say it, it sounded good to us. Sure enough, a few weeks later, we had our Malcolm. 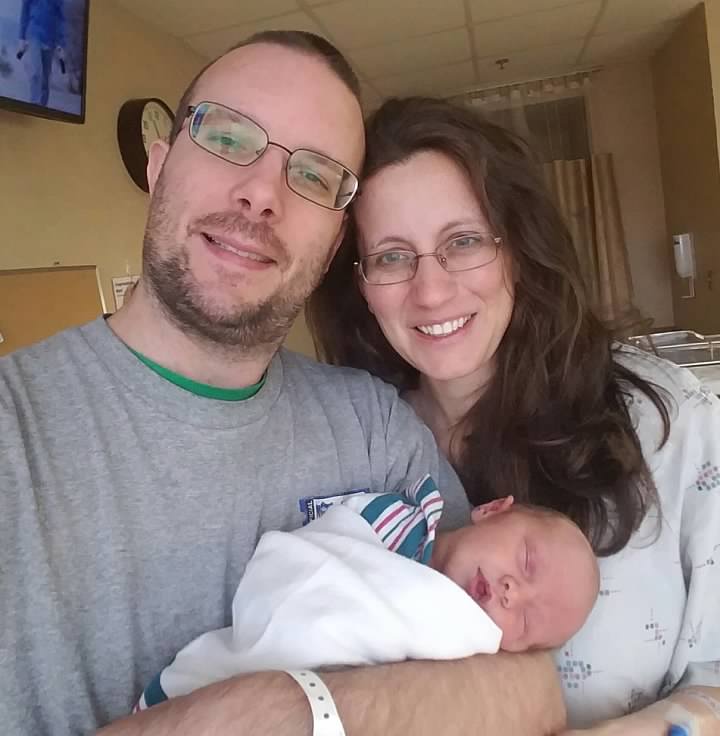 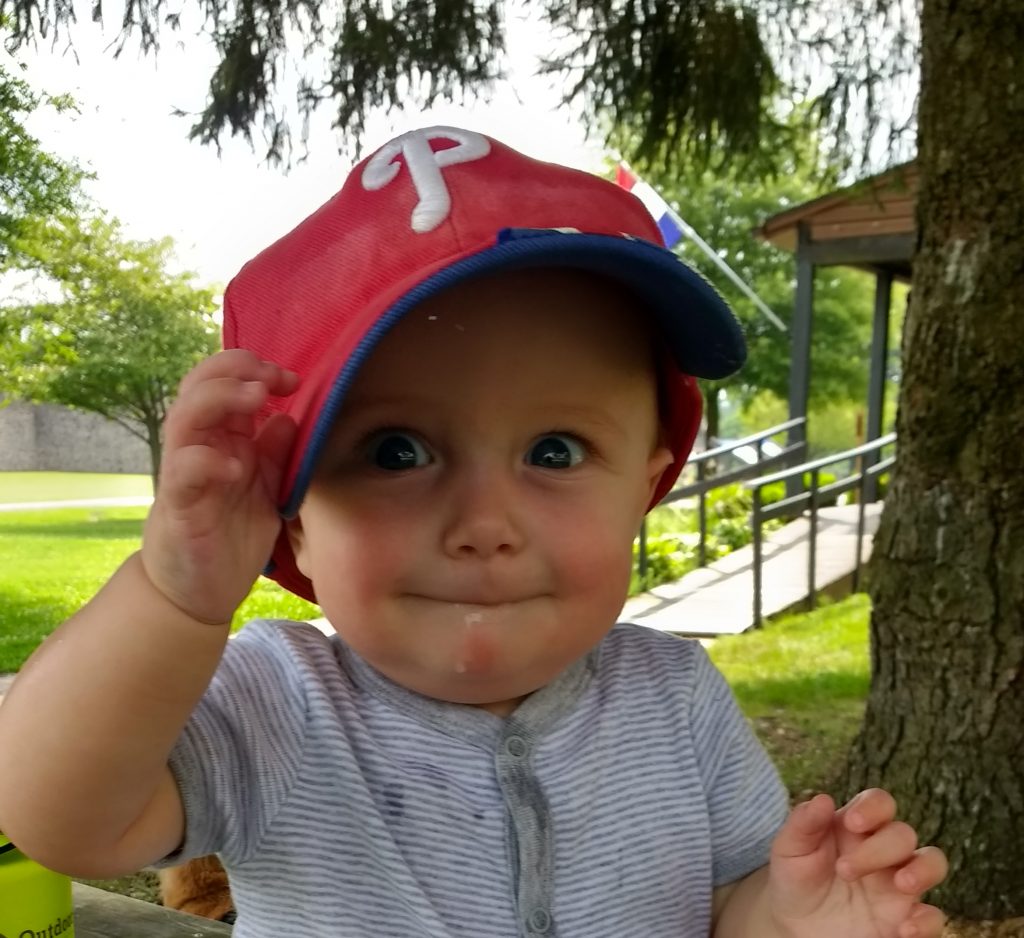 I don’t even remember the following months.  The holidays came and went…we went through the motions for the kids, but I couldn’t tell you one thing that happened.  Chris’ dad bought us all Malcolm Jenkins jerseys for Christmas, which made me cry and smile and all of it. We watched the playoff games cause why not. Sure they won, I sort of cared, but not really.

Then they beat Minnesota and it changed.  All of a sudden it was everything. They had to win.  Chris tried to keep his emotions in check, didn’t want to tie in the meaning too closely, but I couldn’t help myself.

Back up in Philly, on the morning of the Super Bowl, I visited my Aunt’s grave…..she is one of the biggest Eagles fans I have ever known.  We have tailgated, cheered, screamed for and booed the Eagles together. I asked her to snuggle Malcolm during the game and to teach him the ropes.  While I was speaking to her it began to snow, which is Malcolm’s sign. 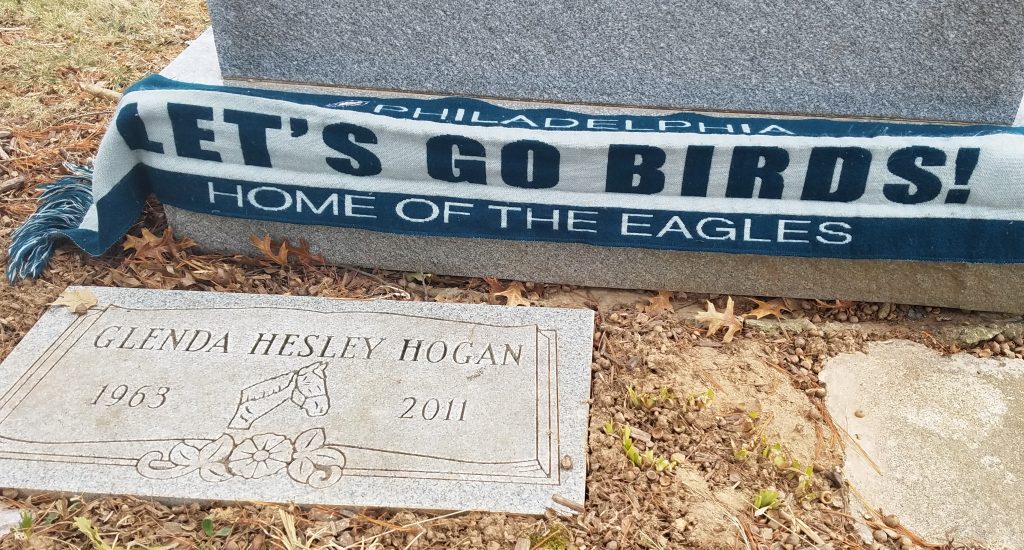 The Eagles were going to win…I could now feel it in every fiber of my being.  The first time I had really FELT anything in months. 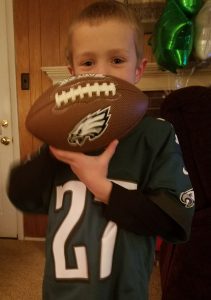 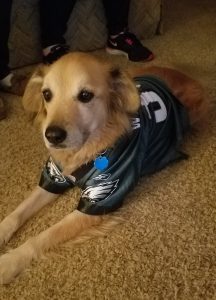 Of course we all screamed like lunatics during the game and the Eagles won their first ever Super Bowl.  (last few minutes recorded below, hero bear celebrated with us)

I really don’t know what would have happened to me, emotionally, if it had ended any other way….I had been so invested.  We came back up for the parade and shortly after I sank back into depression.

A few weeks later when Chris casually mentioned that the Eagles were playing in London  I said ‘yes…..we are going’. We bought plane tickets before game tickets. It was when the idea of how traveling, reconnecting with something I always enjoyed, may help me.

So….many….Eagles fans.  I mean, they annoy the crap out of me, sometimes, but Eagles fans are the best fans.  I told this to every UK Eagles fan I saw….‘you chose the right team’. We waited at customs for 2 hours.  When we told our customs agent why we were there he said ‘I’m going to stop asking people their purpose of visit….everyone is here for that game.’

We swung by the Eagles pubs in town, but The Admirality was closed when we stopped by (we got there just passed midnight) and the next night Passayunk Pub had a 2.5 hour wait.  We met up with my friend Einar the Saturday night before the game so we went out elsewhere to experience the exciting city we were visiting. We walked about 10 minutes from Passayunk and hit up Fitzroy Tavern.  Even there, the Eagles fight song broke out and we had to join. I mean, it was our duty. Einar then leaned in and said ‘we don’t do that here’…haha. I did ask if we embarrassed him and he assured me we didn’t 🙂  After the pub Einar took us to Bali Bali in Soho, which cooked all of his favorite dishes well (Einar is originally from Indonesia), and we ate our hearts out. The Tahu Talor (bean curd omlette) was sooooo yummy.

The next day we headed to Wembley – the 1948 summer Olympics stadium (see general London post for more on my Olympic Stadium Goals) ….oh, and there was an NFL game going on as well. 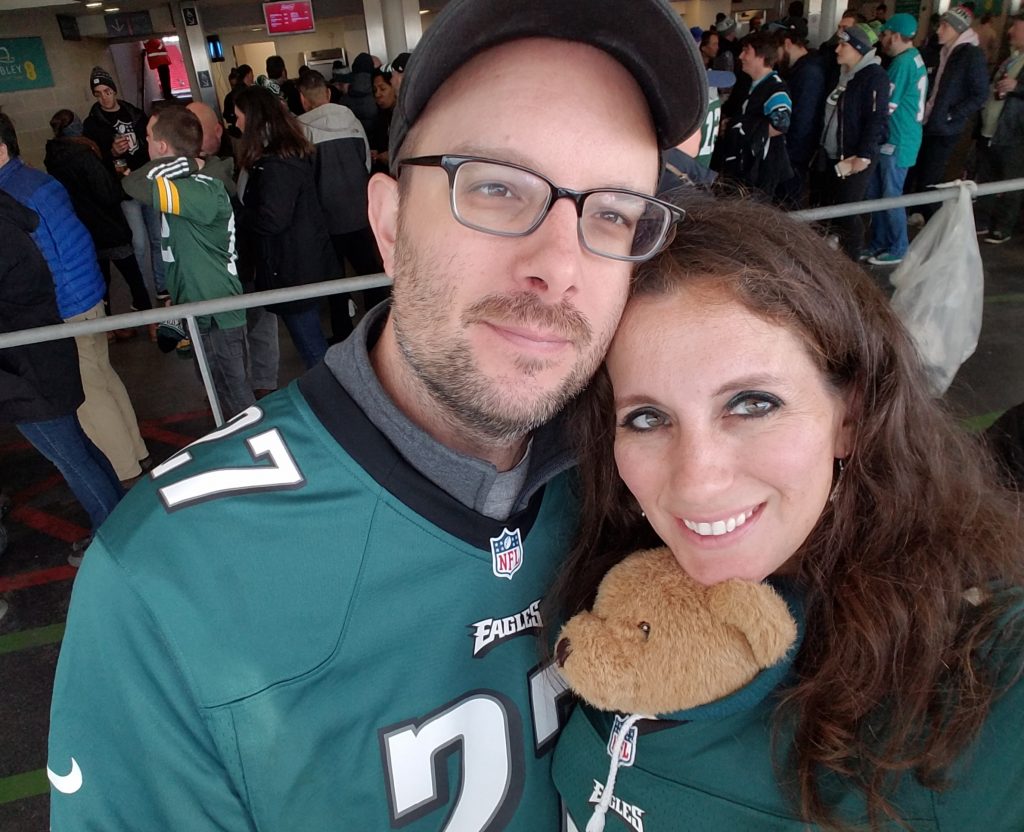 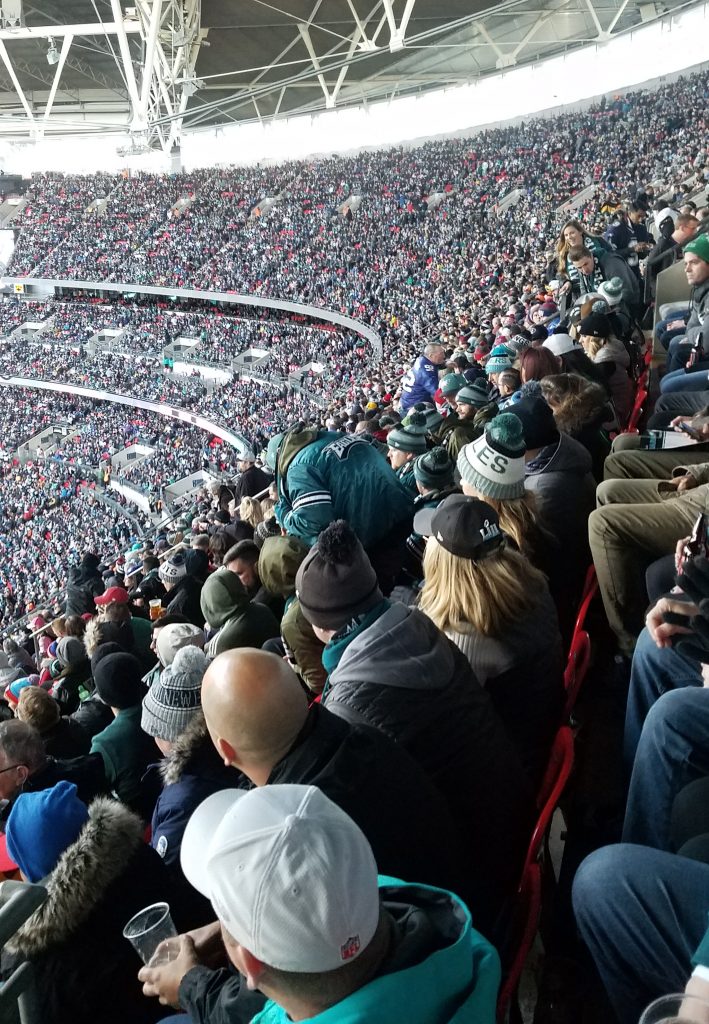 We enjoyed chatting up the UK fans and seeing why they chose to cheer for the Eagles (or another team).

The atmosphere was different than an Eagles game in the states for sure!  The Eagles were WELL represented, as Iggles fans always travel well, but all 32 teams were represented (literally, we were intrigued and so we kept track).  I still screamed for/at my team, but it was a more mellow vibe for sure….all part of the experience 🙂

Sealed with a few big plays by Malcolm Jenknis and an Eagles win, 24-18, it will always be an emotional memory.  A memory forever tied to my baby boy. 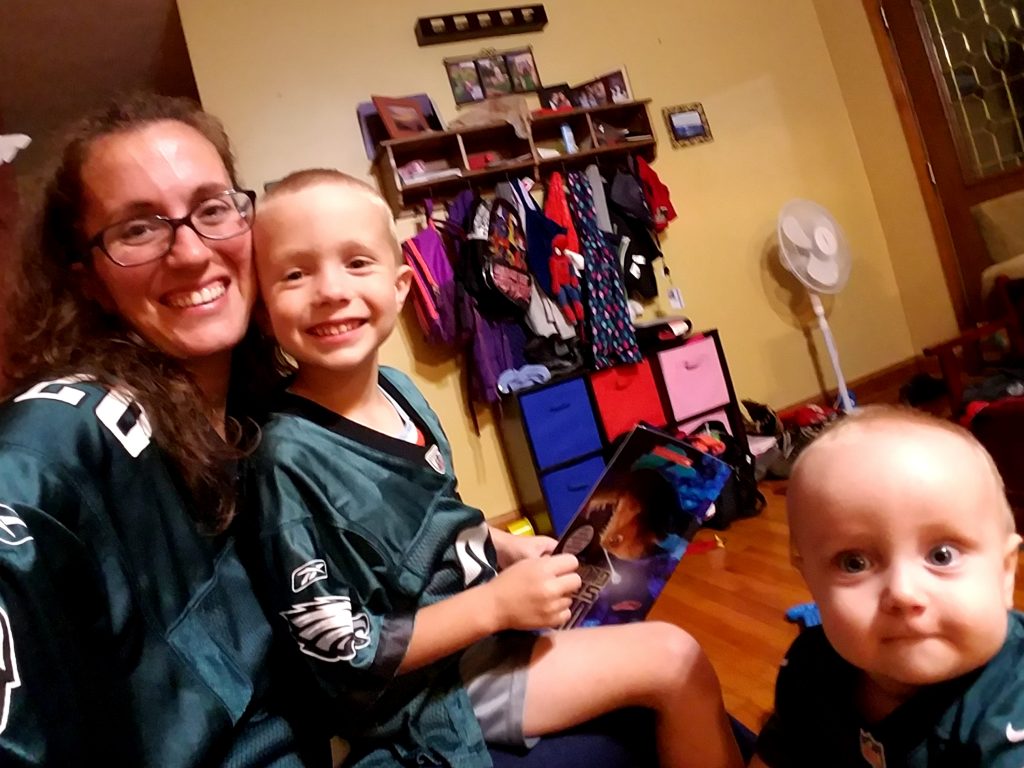