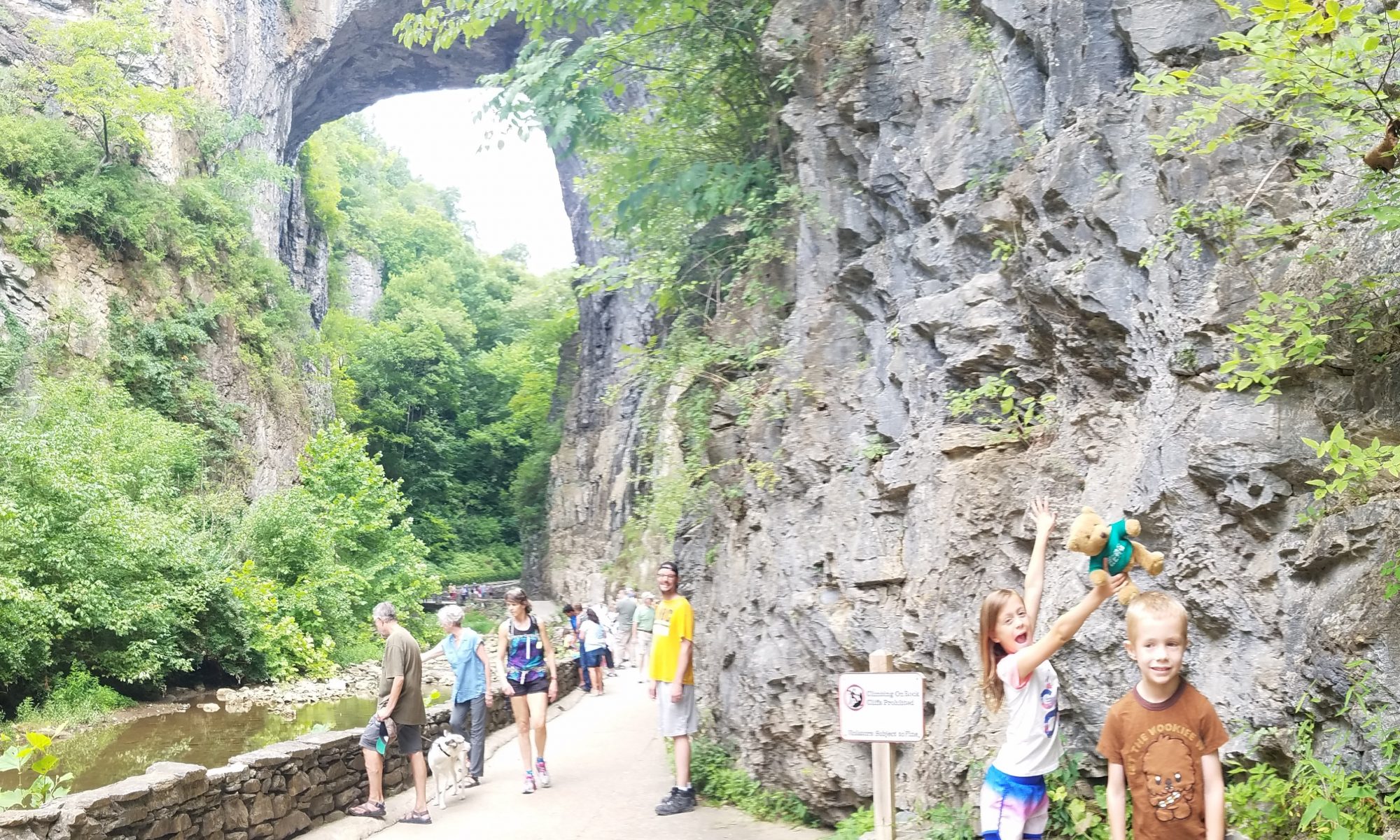 There were some fun things that lured us to Natural Bridge, VA.  One was a classic American roadside attraction….FOAMHENGE!!! Chris and I had been here before, but absolutely wanted to share it and take photo ops with the kids.  A few days before we left I was doing some quick recon on details and saw that…..what?… Foamhenge had moved?!?! Guh. I guess we’ll just have to track it down in Centerville, VA another time.

Another attraction that I had my eye on for awhile was Virginia Safari Park.  I thought it sounded like fun for the kids, and safe to say, it was their highlight.  The price for the 4 of us plus 4 buckets of food for the animals ran just shy of 100 bucks, but it was money well spent.

If you arrive early enough, you can book a spot on one of their wagons that will drive you through the park while you feed the animals.  I highly suggest this option.  It costs $6 a person, but includes a bucket of feed ($4) and not having to worry about damage to your car is more than worth it.  Having a buffalo stroll right by your car windows makes you flinch! We were not early enough to get seats on the last wagon of the day, and while our car wasn’t damaged, I did have an emu poke his head in and nip at my seat (silly emu).  Also, as the driver, I was worried about turning animals into roadkill (though most of them scooted out of the way, a few lingered in front for awhile) and didn’t fully enjoy the experience. Another plug for the wagons: there were off-the-beaten-path roads marked ‘wagons only’ that meandered by watering holes and around the far side of hills, so they get better access than cars do.  Still, it was a cool experience seeing some very large creatures up close. One other tip, try and ration the food! Or buy more buckets (I wish we had done this) We were out towards the end of the safari, when we saw a magnificent elk buck that we would have loved to have fed (he saw we were out of food and wouldn’t give us the time of day). 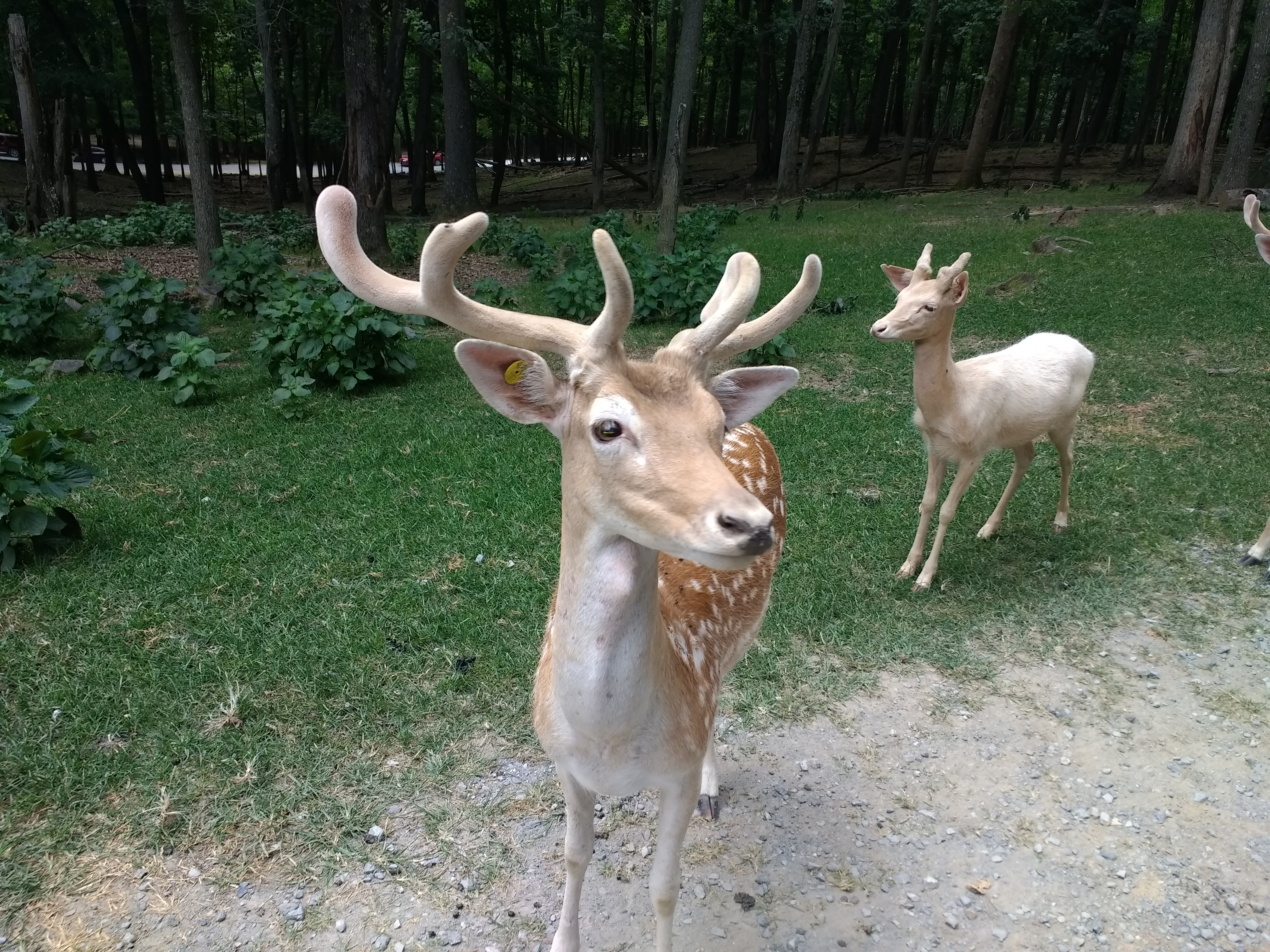 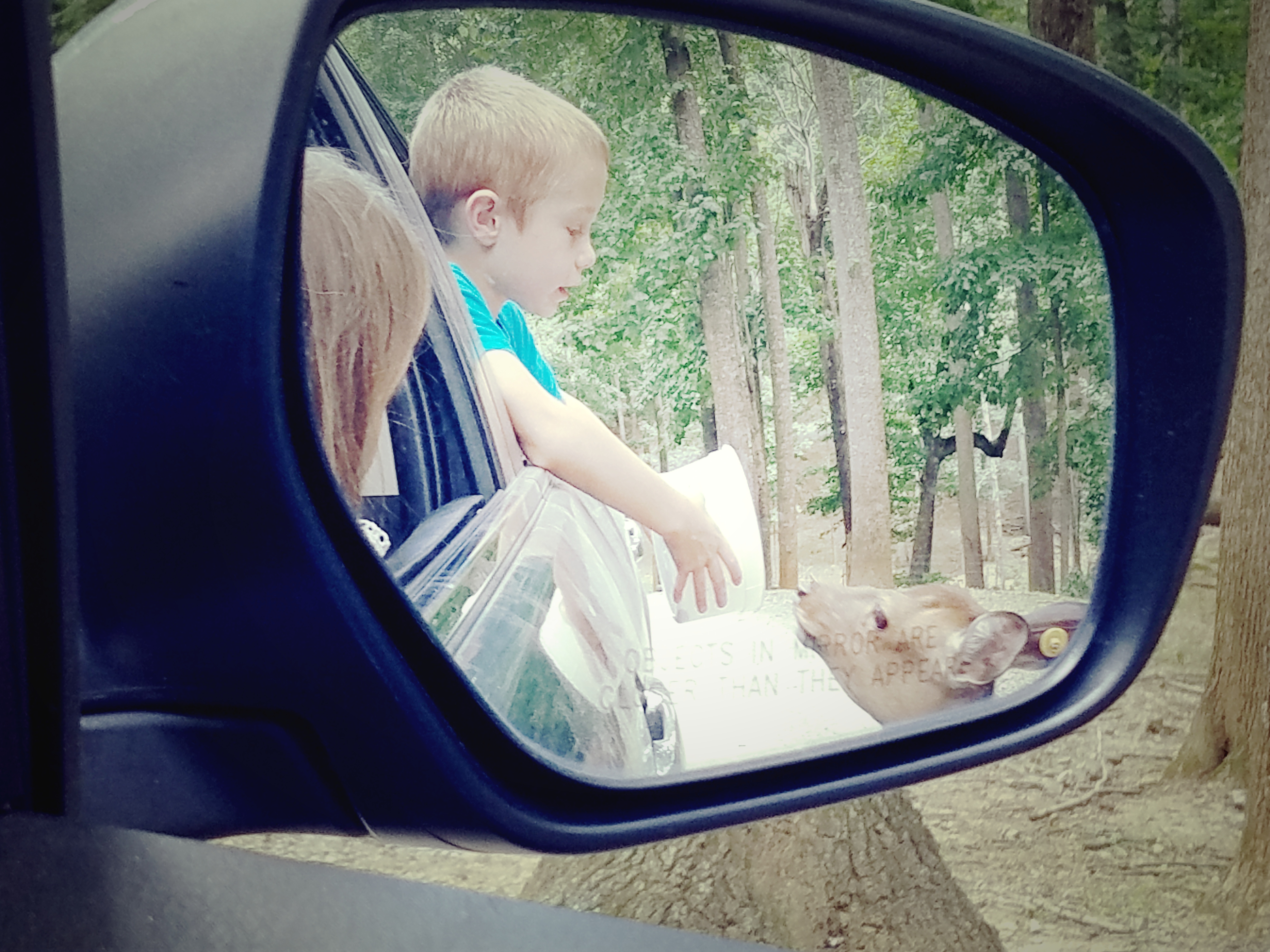 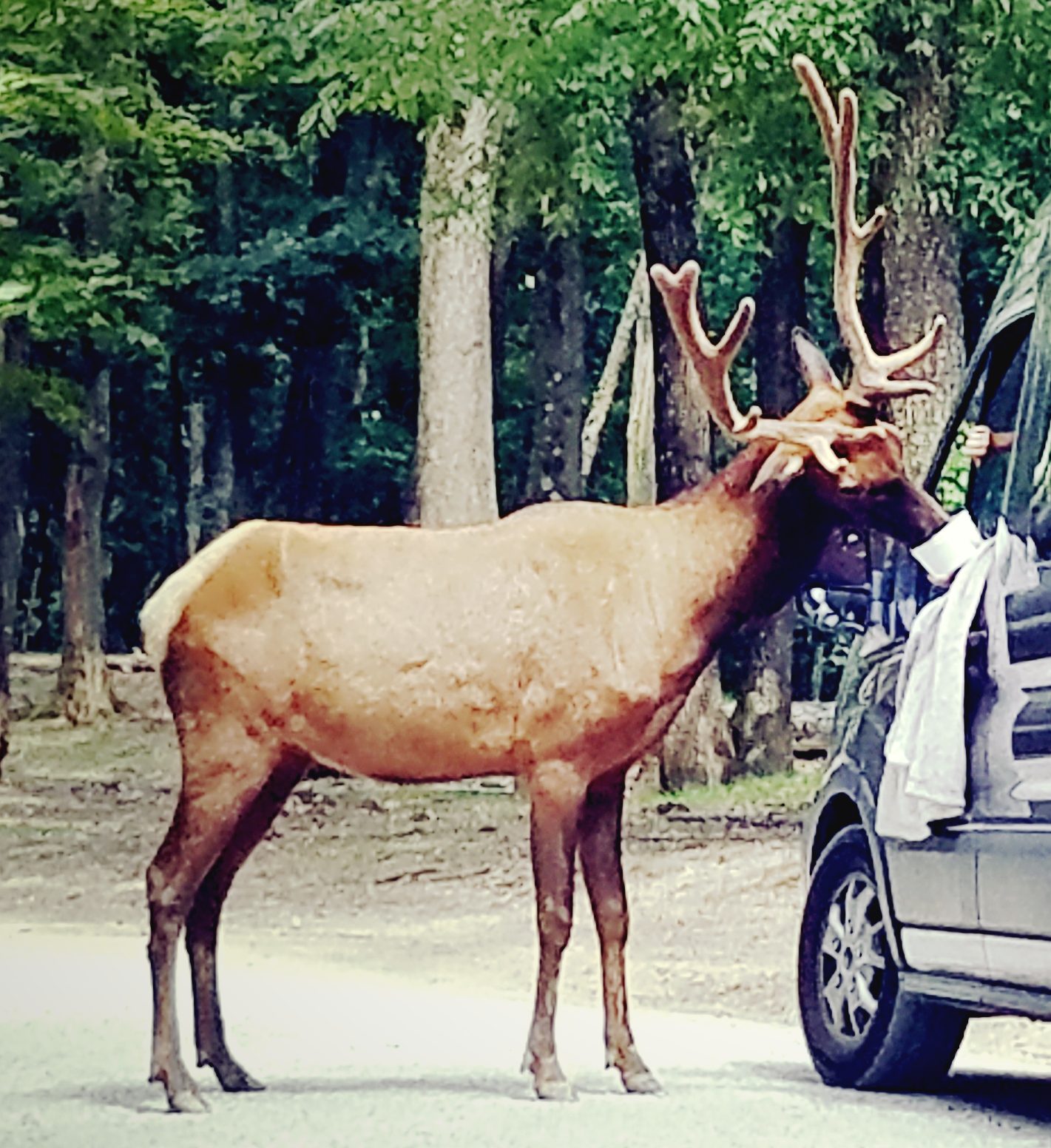 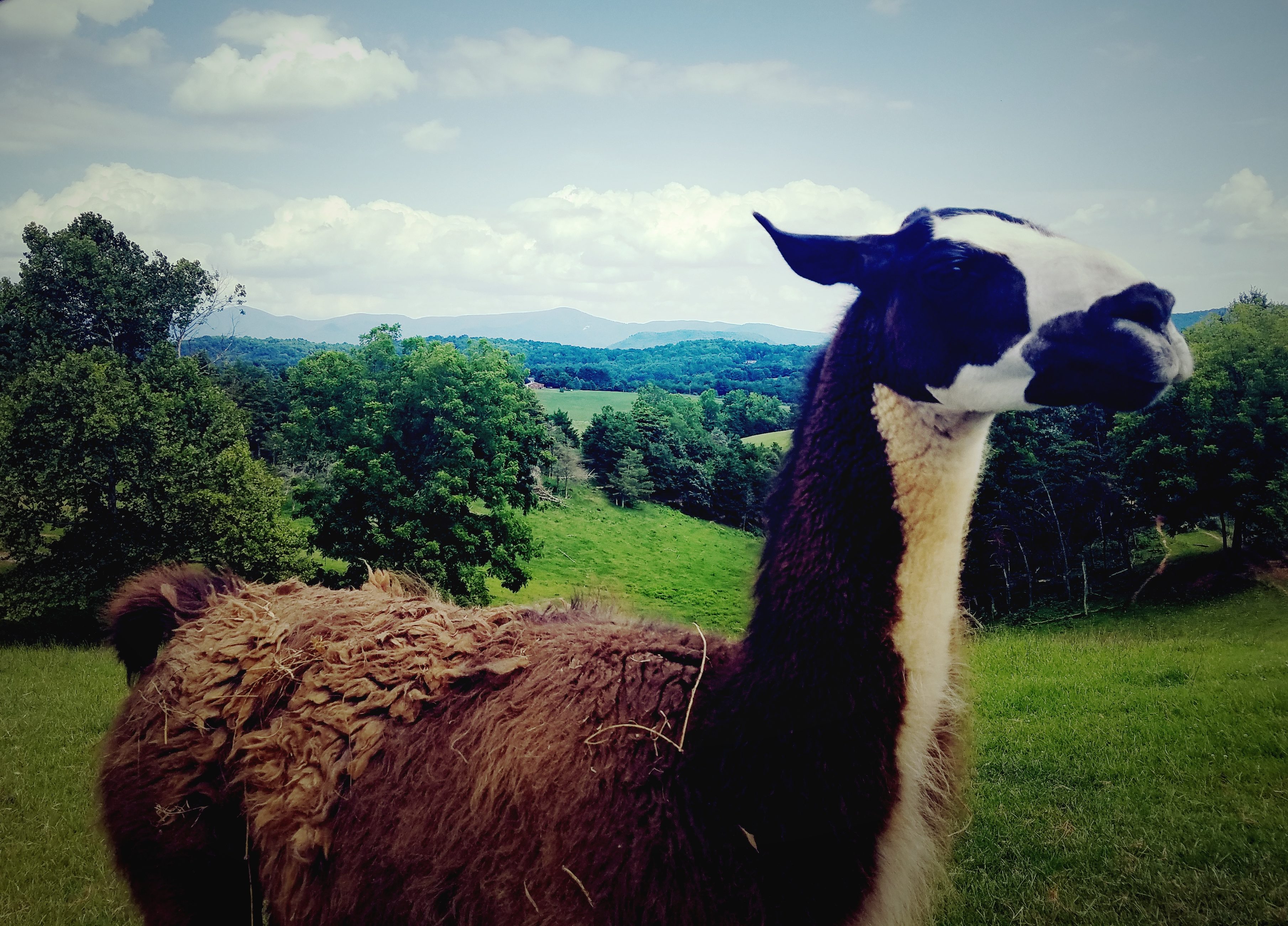 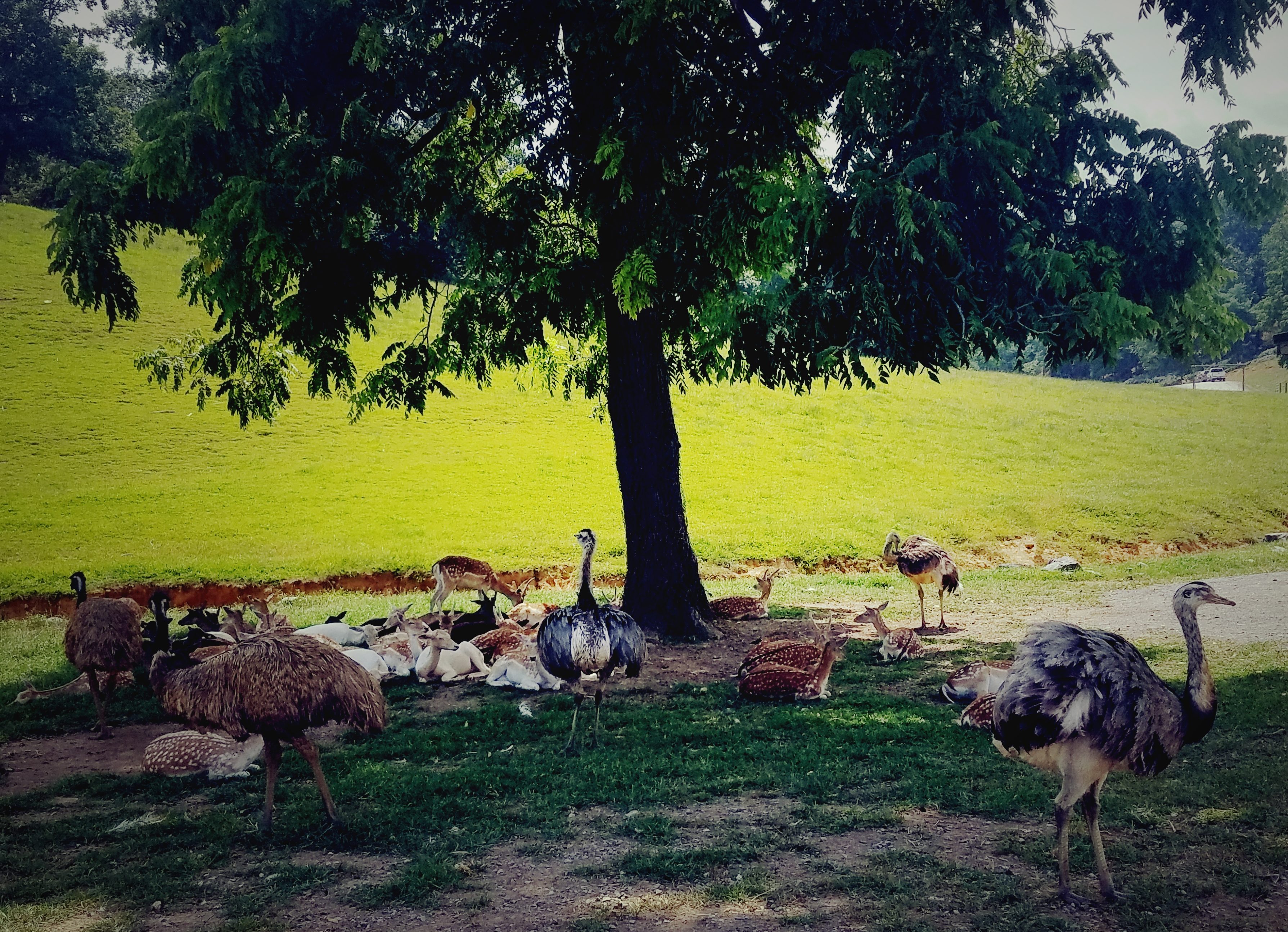 After the driving part of the safari, there is a walkthrough portion that also exceeded our expectations.  You can look at reptiles and monkeys (several with babies on their backs!) and feed goats. There were also several more unique experiences.  You can stroll through a kangaroo enclosure and walk through a parakeet aviary where you can have several birds land on you at once while you offer them seed from sticks.  This was my daughters absolute favorite. 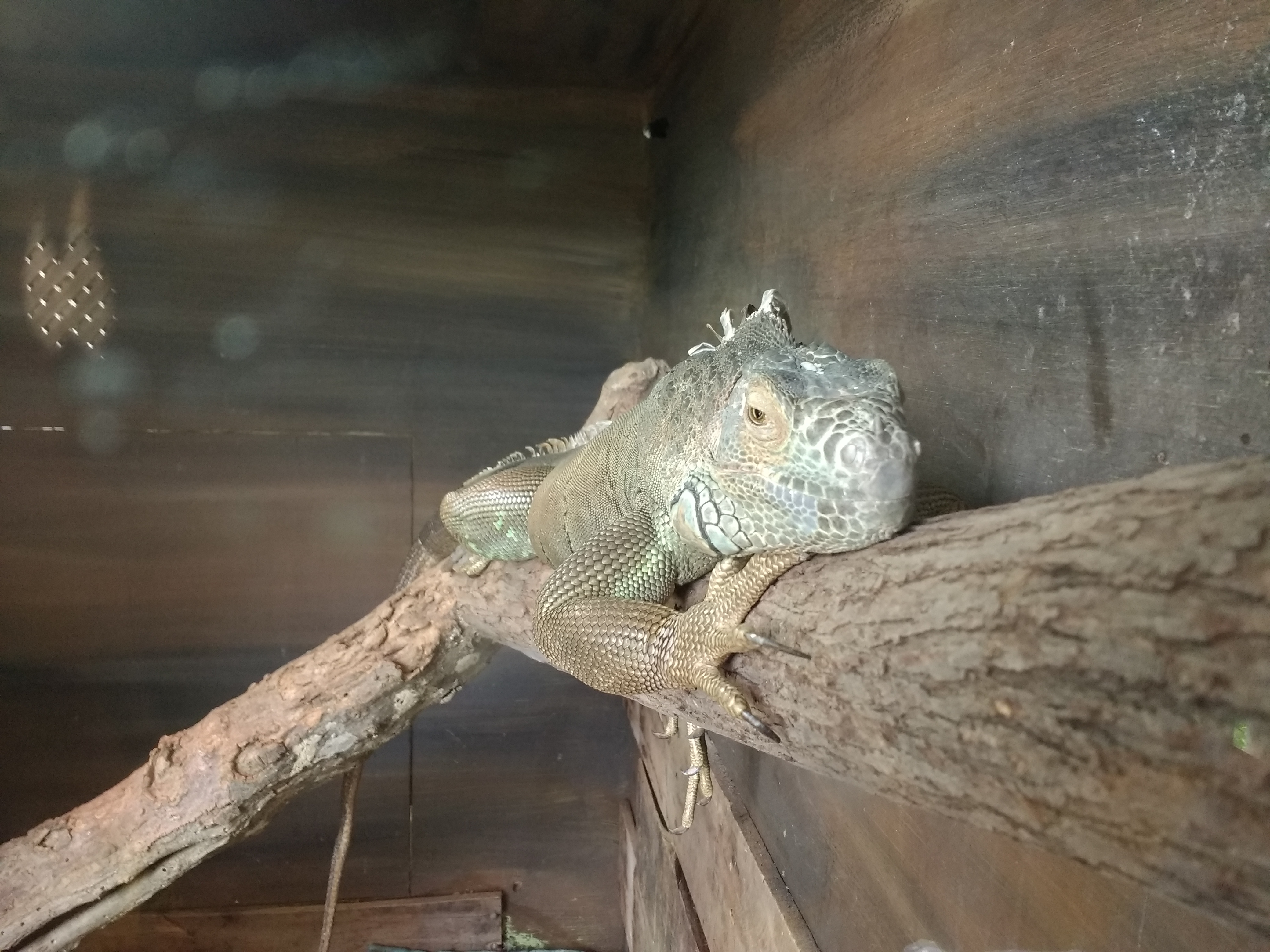 There is also the opportunity to feed giraffes.  The ‘giraffe food’ is romaine lettuce and sold for 5 dollars a cup.  A little over-excited, I bought us each a cup. The giraffes (perhaps over-fed…it was the very end of the day), completely ignored us and we gave all our lettuce to some chill tortoises that were hanging out waiting for giraffe leftovers.   Other animals included a white tiger and two pacing cheetahs. 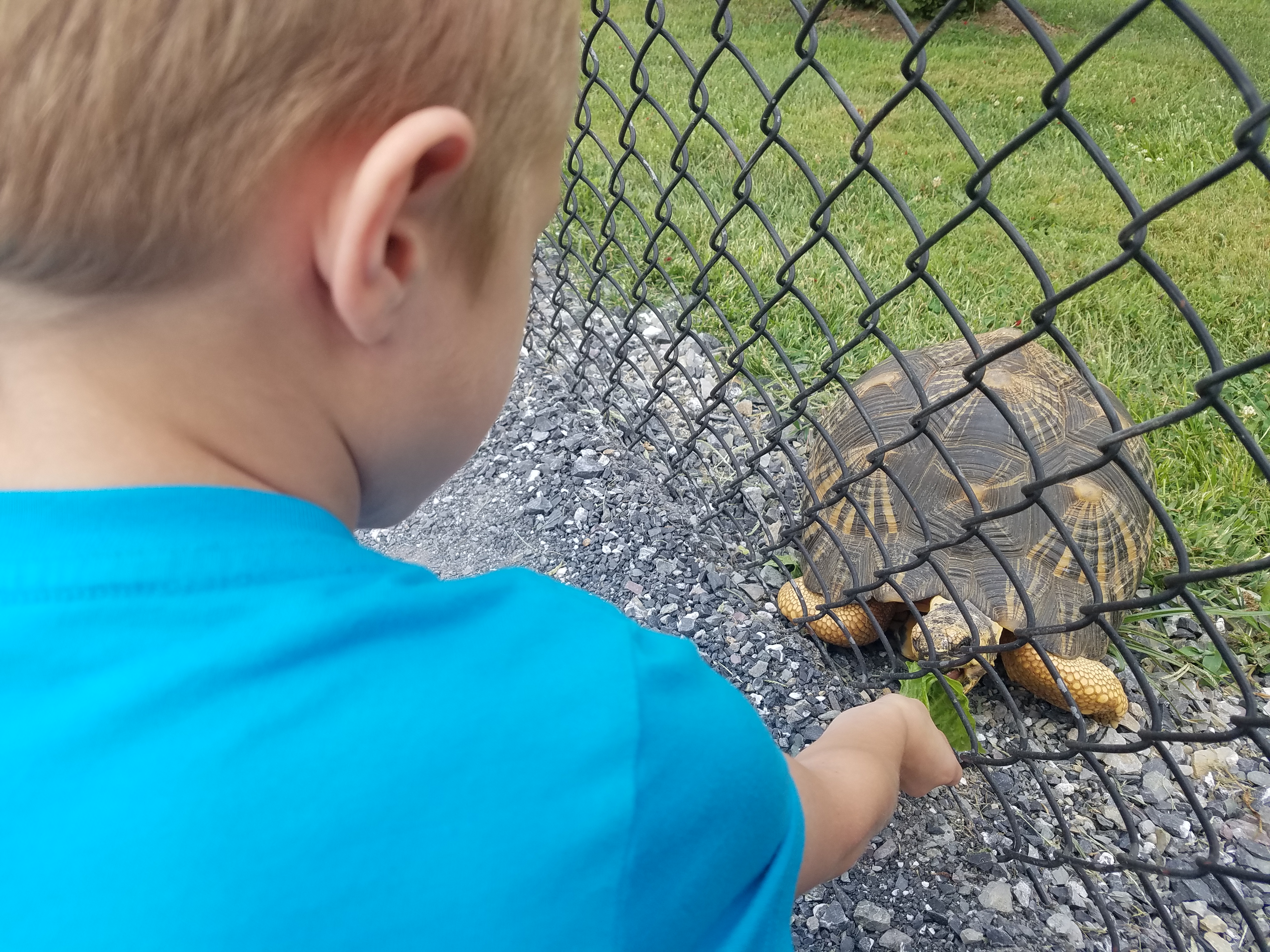 The ONLY negative we had was the snack bar staff would not refill our water bottle with tap water, stating it was the park’s policy to not refill, but we could, of course, purchase.  There also weren’t any water fountains, that I saw.  I can’t recall being refused water at any family friendly location before, and it did not sit well with me. We ended up buying, which, aside from costing money, defeats the purpose of us carrying around a reusable bottle.

After the Safari Park we went back to finish setting up camp.  Camping is work, but also such a great experience. After we were set up and cooked dinner on the fire, I swayed in the hammock with my son, talking about our day and watching the light fade through the trees and enjoyed one of those perfect moments.  I didn’t have a camera to capture it, but it will be in my memory forever.

The next day we set out to send out some positivity in Malcolm’s memory at Natural Bridge State Park.  The kids love nature and learning about nature (they hold snakes without batting an eye), so volunteering at the park seemed like an good way to start our Remembering Malcolm experiences.  I wanted to make sure it was something that would keep the kids engaged, and tried to have them understand why we are doing what we are doing.

In all honestly, my son was bored (and said so many times).  I wanted to tell him to suck it up and do it for Malcolm, but quickly reasoned that would push him away from our ultimate goal of doing something like this on every trip. There was plenty of space for him to occupy himself (which almost always consists of him pretending to tackle/be tackled/dodge a tackle), and Liz (our extremely helpful and kind park ranger) supplied him with a coloring book about caves. He ended up talking to Liz for quite some time about cave life (impressive, since he is my shy guy). He was fascinated that some animals have adapted to cave life by not having any eyes at all! We were visiting the Caverns at Natural Bridge the next day, so he could get the cave experience.  Natural Bridge State Park is beautiful, educational and FULL of wildlife, especially snakes.  We ran into several rather large water snakes and queen snakes along the rock wall at the river path. 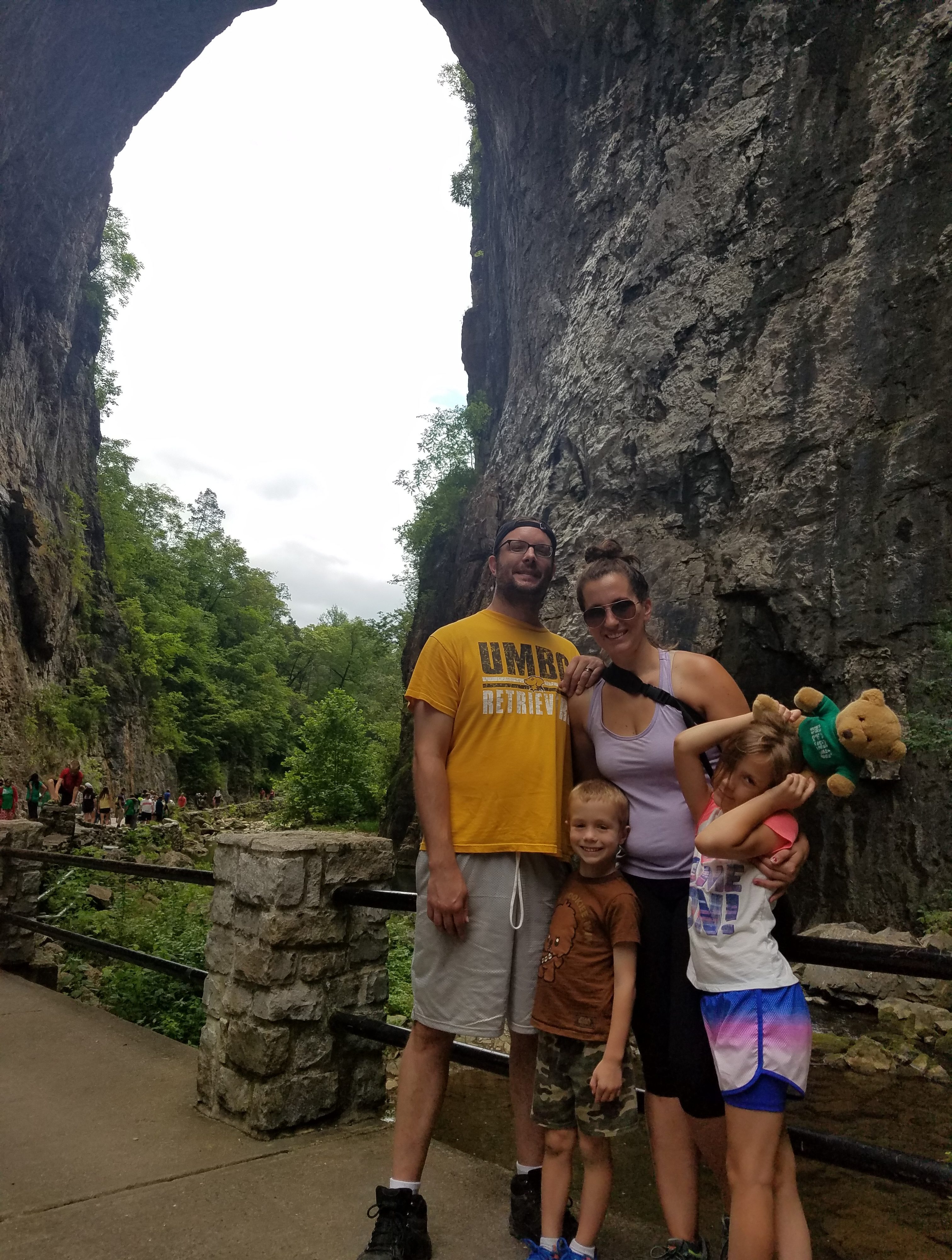 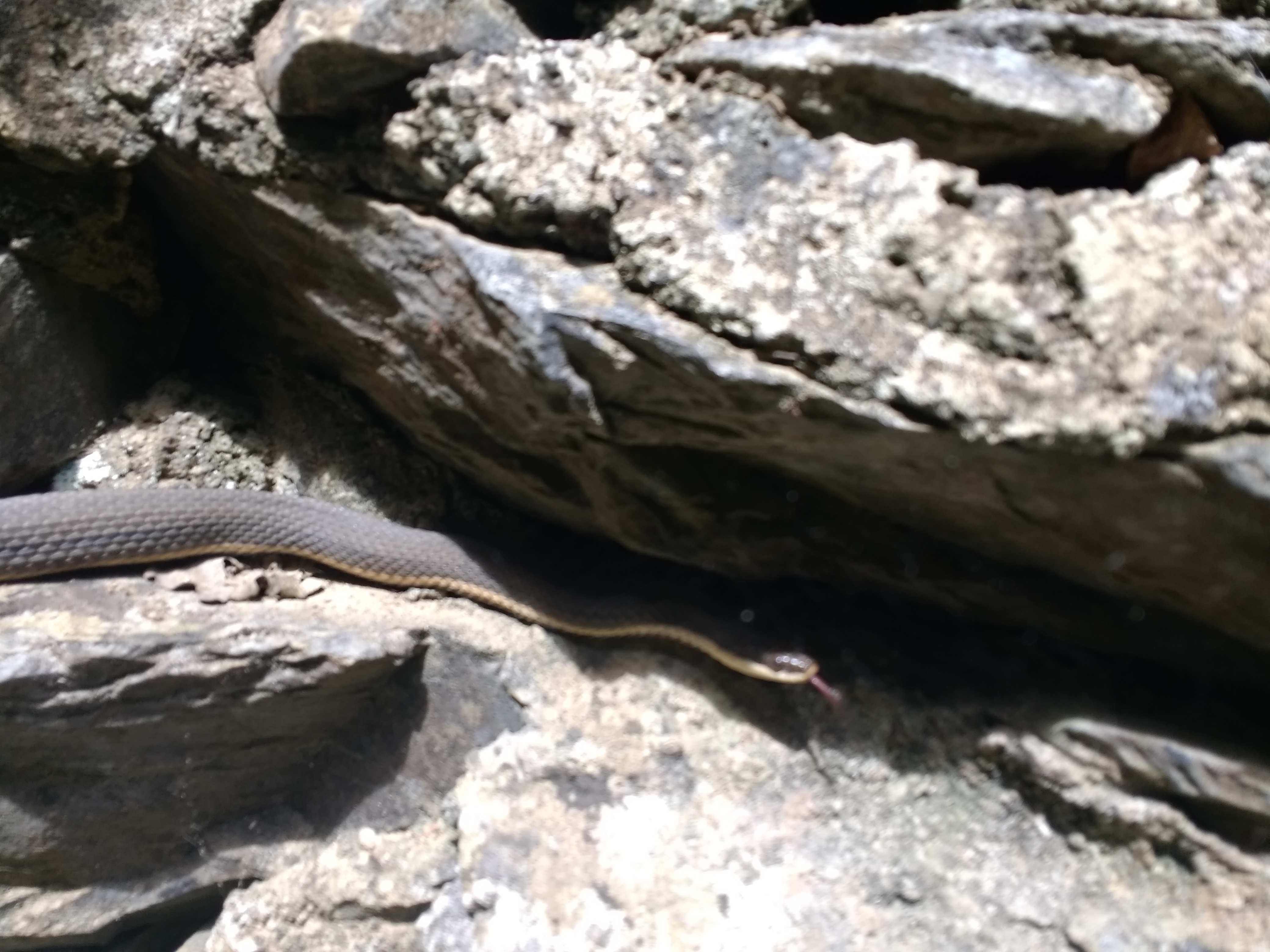 After the park we headed back to camp for a hike with the dog and went swimming at the lake.  Cave Mountain Lake campground is SO GOOD. Away from the summer craziness of the Shenandoah, it has nice facilities and lake access for just $15 a night. A quiet place to camp in during prime summer days.

It was supposed to rain on our last full day, so we had planned the caverns for that day.  However, when we poked our heads back out from the underground, it was sunny, so we hopped back over to Natural Bridge State Park for a more relaxed stroll through the park.  A different experience from the day before. 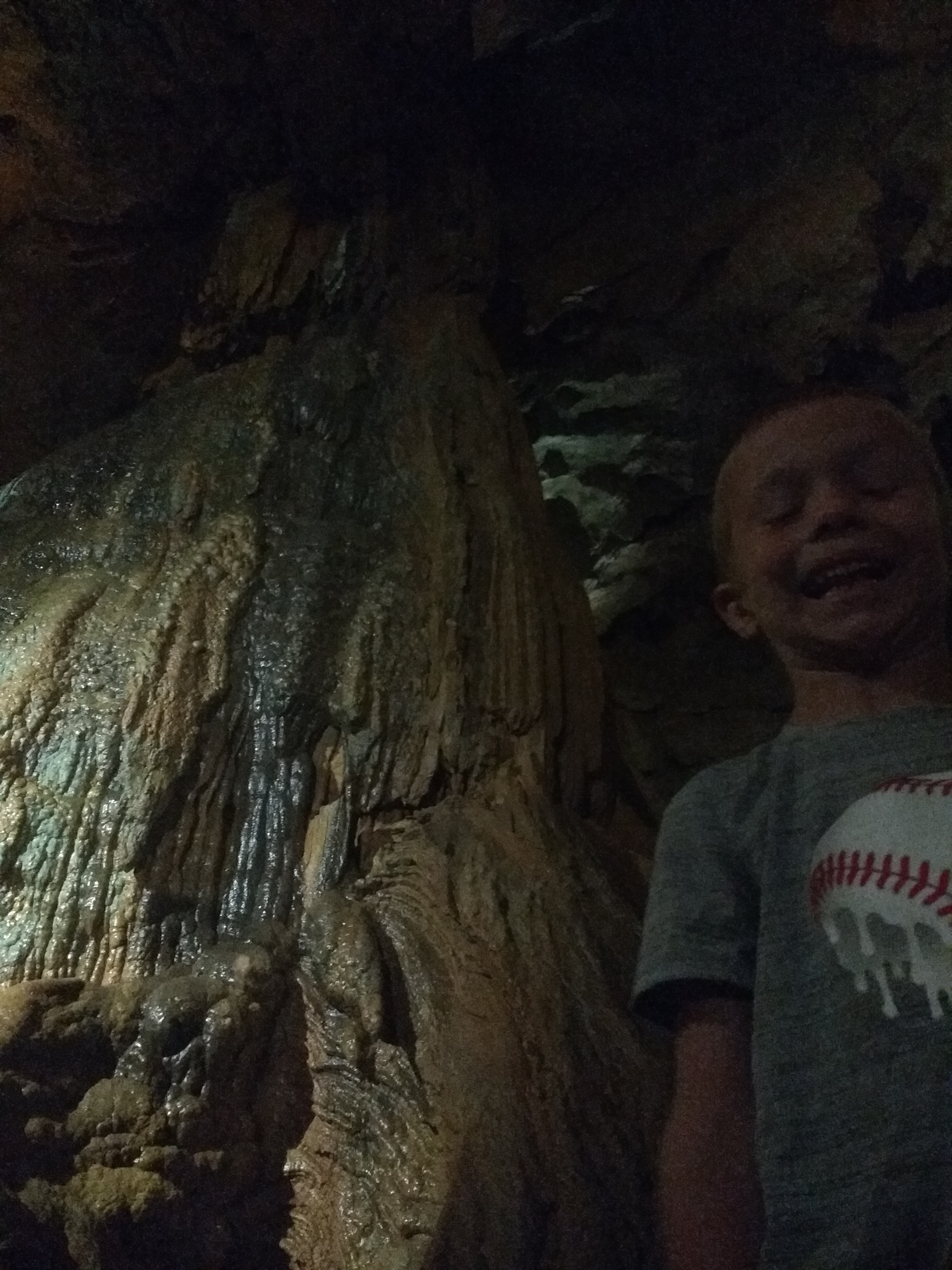 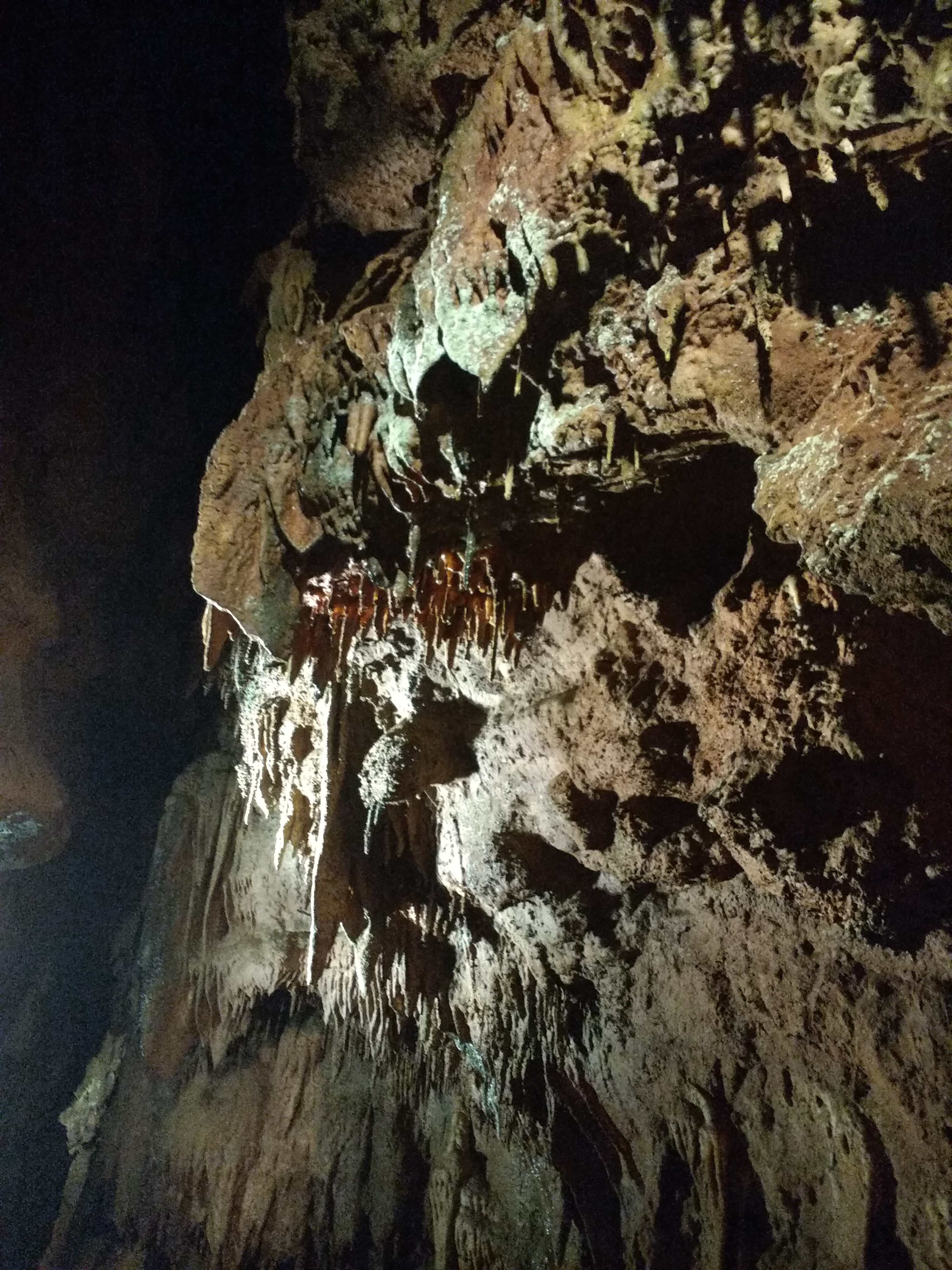 We enjoyed our last night of camp and then packed up (in the rain, as seems to be our tradition) and drove the 4 hours home through occasional squalls.  This trip was so much fun and we are already planning on making it part of a larger camping trip next year.

Video version of fun below